Yesterday’s race was one of the most exciting and rewarding races I have ever run. I had moments of doubt, frustration, and exhaustion, but I was able to push through it all to accomplish a goal so special to me that I had not wanted to voice it for fear that I wouldn’t achieve it – running a sub 2 hour half marathon. Well, I guess I’m going to need to find a new goal now, because I can officially check that one off the list!

The morning started early with a cup of coffee in my favorite mug and my favorite White Chocolate Macademia Nut Clif Bar (not pictured because I ate it!). 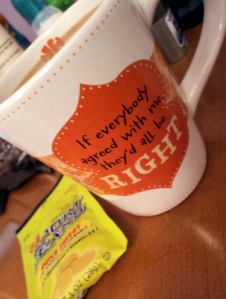 The getting-ready process had a new step to it for this race – applying one of the temporary tattoos we received in our race packet! I put the cute running raccoon on my bicep to bring me strength during the run. 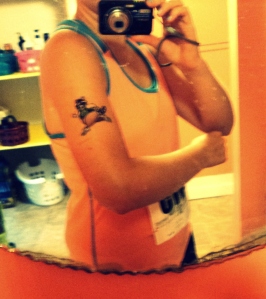 Before I knew it, it was time for me and Kristin (my housemate) to go pick up Lisa, another friend who was running the 5K with Kristin.

The race was held at the local high school just a couple minutes down the road, so getting there was thankfully no problem. We had time for a couple pics in the parking lot before we went to stretch and hit the restrooms one last time. 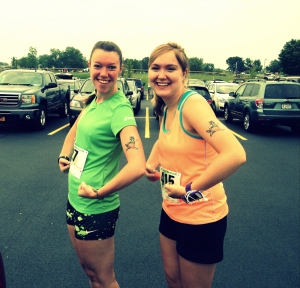 Then, it was 8, the official start time for the half, and we were off! The first part of the course took us into the main town. They closed down the street and we did a loop of the famous Bear Fountain, before heading back out the way we came and towards more farmland.

Miles 4-10 were a big loop on dirt roads with LOTS of rolling hills. I tried to trick myself by thinking, “I love hills!” It kinda worked.

I also distracted myself looking at the beautiful views of the farms from the top of the hills.

Through the first half of the course, I was in a great mood. I was running at my target pace, I felt strong, and I just kept picturing myself crossing the finish line and finally nabbing that PR. By my watch, I ran the first half in just about 56 minutes. I was right where I wanted to be.

It didn’t end up being that easy.

Just after mile 10, the course had a HUGE hill. I had managed to stay pretty positive through all the other hills, but this one was a beast, and I started to freak out a little. I ran as much as I could up the hill and then I was forced to walk for one or two minutes. I could see the marker for mile 11 in the distance, and I wasSO CLOSE, and suddenly, it seemed like this one stinking, huge hill was going to keep me from reaching my goal. I started getting angry. So I sucked up whatever grit and energy I still had left, and started jogging again. At the top, a woman had parked her van and was blasting music, trying to encourage us runners. Normally, that would make me smile, but I was too busy gasping for air.

Then, I reached the paved road that led back to the school where the finish was set up. A volunteer called out, “It’s all downhill from here!” That was just the news I needed to hear. It was going to be close, but I knew if I ran the last 2 miles as hard as I could, then maybe, just maybe, I could make up for the time I lost on that hill, and still get my PR. So, I buckled down, cranked up the iPod, and RAN.

As the school came into view, I tried to catch a glimpse of the timing clock, but I couldn’t see it. I knew from the timer on my iPod that it was going to be a close shave. I still had to run down the driveway of the school, onto the track, and run 3/4ths of a lap to the finishing line. 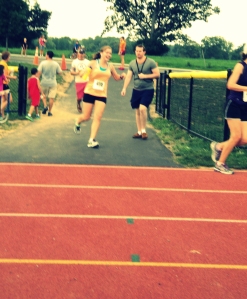 When I reached the track, I started sprinting (at least, it felt like I was sprinting. After running 13 miles, it probably didn’t look like I was going very fast.

) As I came to the final straightaway, I finally saw the timing clock- 1 hour, 58 minutes!

Feeling ecstatic, I zoomed over the finish line in 1 hour, 58 minutes and 15 seconds. MISSION ACCOMPLISHED!!

Never have I ever been so proud of myself for not giving up on a goal- even when it seemed like it wasn’t achievable.

I reunited with Kristin and Lisa who had taken 5th and 6th places in their age groups in the 5K, and we sampled some of the bananas and fruit cups at the food table. There was some very delicious-looking pizza there as well, but there was no way I could stomach pizza after that run.

After a much-needed sit/stretch in the grass, I checked the official results page for the half- I came in 7th out of 20 in my age group(so my friends and I came in 5th, 6th, and 7th! Weird, huh?), and I had an average pace of 9:02/mile. I got my sub 2 hour half, and beat my previous PR by 4 minutes. THAT’S what I’m talking about!

This race also came with some nice swag, which is always a plus in my book! I got a tech shirt, medal, and a free jar of crunchy organic peanut butter! I’ve already tried it, and it is some delicious stuff. 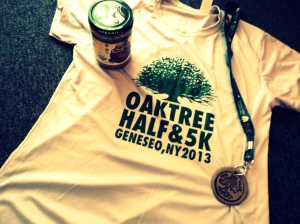 We drove over to a coffee shop nearby after, and I treated myself to a French Toast bagel with cream cheese and an iced chai. It was just what I needed after 13.1 miles of hard running.

I could not have asked for this race to go any better, and I’m still basking in the post-race glow of success! The only question now is, when am I going to run my next half? It won’t be long, I’m sure.