As promised, today I’m sharing the full story of Sunday’s record-setting 5k. 🙂 After my mom and I missed our last 5k due to the snowy weather and dangerous road conditions, I was VERY excited to be finally running a race. The temps were forecast to be in the 60’s with zero chance of snow. It was still a bit cool in the morning and I ended up running the race wearing my sweatshirt.

This race specifically benefits the charity Homes for Our Troops, an organization that helps design and build houses for injured veterans. At 8:45 there was a little ceremony honoring all the veterans who were present (there were a lot!), and then we went to line up at the start.

It was a little crowded at the start, but I was happy there were signs for 6, 7, 8, 9, and 10 minute-miles, so we were able to seed ourselves to help things run a little more smoothly. I knew I wanted to push the pace, so I wished my mom good luck and went to stand with the 8-minute mile section.

The 6 and 7-minute seeds were started first, and then 90 seconds later… we were off! It was still a bit crowded at the start (I suspect some people may have seeded themselves according to a pace they would like to run, rather than what they were capable of running, but oh well.) The course began with a steady incline, but my adrenaline was flowing and everyone  was running fast, so I handled the first hill no problem. There was a band playing at the top of the hill and I would have liked to slow down, just to listen a little more, but I was focused on maintaining my pace.

I was quite happy to look down at my watch to see this split after the first mile, especially since the timing clocks on the course weren’t reflecting my true time since I had started in the second wave, 90 seconds after the first wave. Mile 2 was tougher than the first mile though. There were more hills and I was beginning to feel tired. I spotted a girl passing me who looked to be around my age and vowed to try to stay with her. I had my watch set to show me my current pace and knew I had slowed down a little, but was still doing a pretty good job running fast.

It was after mile 2 that I thought to myself, “Hey, this might end up being close to my PR!” I’m not really great at doing math while running, but I was pretty sure that if I could just run another sub 8-minute mile, that I could possibly beat it. And the course finally cut me a break on this mile – it was mostly downhill or flat into the finish. So I lengthened my stride and tried to kick it up a notch, not knowing if my legs would have it in them after the hills. They did. I ended up passing the girl who I had set as my “target”, and continued to run hard, rounding the last corner and coming into the final straightaway which was lined with cheering spectators.

I stopped my Garmin as I crossed the timing mats and was ecstatic to see that my hard running had paid off – I had beat my old PR by about 12 seconds with an official time of 23:34 (avg. 7:35/mile). 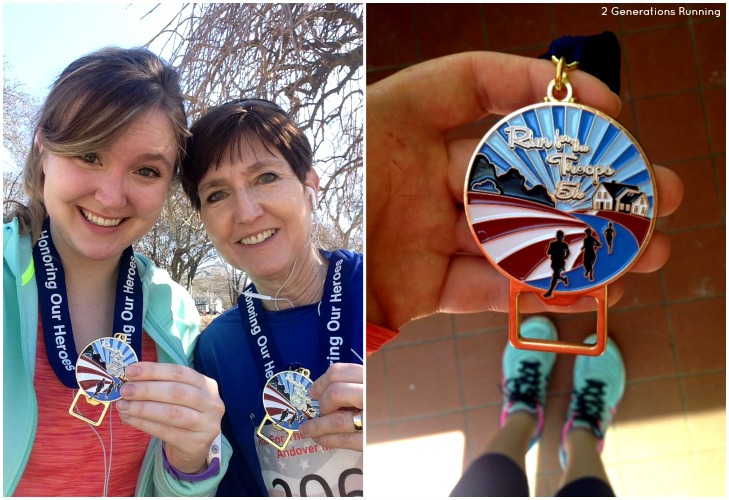 My mom crossed the finish line only a few minutes later (although I totally missed her), missing her PR only by a matter of seconds.

We enjoyed our post-race bananas and granola bars while waiting for my dad and brother, who were walking the course.

After meeting up with them,  we all headed home, where my mom and I stretched a little – and then proceeded to go out and run another 6 miles (it was long run day!) With the awesome warm weather we were having, an executive decision was made to run to the closest ice cream stand, because everyone knows ice cream = the perfect refueling food for runners.

We slowed the 6 miles down to around a 9:25/mile pace and thankfully, they didn’t feel too challenging after the speedy 5k my mom and I had just run. Plus, having ice cream to look forward to helped. 🙂

Pistachio for my mom and Moose Tracks frozen yogurt for me. It was the first ice cream of the season and it was perfection.

So all in all, a pretty awesome day for running! Here’s to hoping the Providence Half goes as well as this race did! Have you gone out for ice cream yet this spring? What are your thoughts on splitting up long runs like this?

6 thoughts on “Run For the Troops 5k”