Remember how I said I wanted to shave some time off my 5k PR this summer? Well, it was a VERY CLOSE shave, but it’s official – I have a new 5k PR! I took ONE second off my overall 5k PR at the Lowell Good Times Series this past week, and about 11 seconds off my course PR.

The theme for Tuesday night was ‘Coaster Toss’ – each runner was given a coaster from the bar that hosts the race and told to write their name and bib number on it. Just before the 1 mile marker, there were buckets, and the object was to throw your coaster into the bucket – but you have to keep running while you do it. I was really hoping this would be my year, but alas… I missed.

Everything else about this race lined up for me though. It was a little cooler (still a relatively warm and humid summer night, but not as bad as the week before). I had time to stretch and warm up a little and try to get my head in the game. I had remarked to my mom earlier when we were driving over that I didn’t feel fast. Maybe I was less pumped up than usual, but once I was surrounded by all the excited runners, I felt ready to go.

I ended up holding onto my coaster to try to throw it on the way back so that I wouldn’t have to throw across my body since I’m a righty. So much for my strategy though. 😉

I wouldn’t say I felt comfortable on this race, but I did feel in control, which was pretty awesome especially after my early disasters with pacing myself. My splits ended up being 7:24/7:44/7:38, good for an average pace of 7:34/mile. I know there are folks out there who can run a 5k MUCH FASTER than this, but when I think back to the times I used to run a few years ago, I can’t help but be pretty darn pleased with how far I’ve come.

I managed to even smile for the camera sort of (gotta love the free downloads this race offers!).

I was especially proud of myself for that last mile. It did not feel easy, but I just concentrated on reeling in a few runners at a time, and the fact that I was going to be done soon. 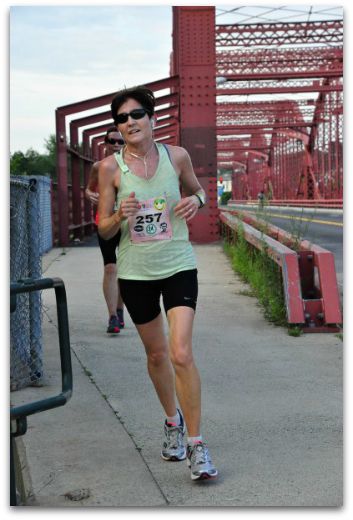 Finally, I crossed the finish line – 1 second ahead of my 5k PR! As my mom said, it was a good thing I didn’t stop to sneeze or something because I could not have cut it any closer. I ended up 6th in my age group for the week, and moved into 4th in overall points for my age group. 🙂 AND I was the 10th female overall! Not too shabby! My Mom was a little off her PR, but she still ran a strong race, good for third in her age group again.

My brother has also joined us in running this 5k the past few weeks, and while he is relatively new to running, he’s been doing great! (My mom is plotting to turn him into a runner too!)

Sorry for the small pic, but this photo of our running club made the race website, and I thought it was too great NOT to include. 🙂