What a week of workouts this past week!

I think I’m finally starting to hit my stride with the whole working 5 days a week plus crazy commute AND finding time to fit my workouts in.

Monday – I kicked off the week with 30 minutes of strength training. I gave my legs a rest day since I had run 7 miles the day before, and I wanted them to be fresh for the 5k on Tuesday.

Tuesday – I ran a new 5k PR as you know from yesterday’s post!! I was absolutely stoked to see some of my speed work and focus on pacing begin to pay off.

Wednesday – Rest day. I got home late after a particularly sucky commute home (just imagine a subway car jam-packed with people with no AC. It was so awful my friend and I got off after a stop and walked the rest of the way to the station, but we ended up missing the earlier train. Not a fun day.)

Thursday – Got to go into work a little late, so I woke up at my regular time and went for a 4 and a half mile loop. There had been rain overnight which had cooled things off, and it felt almost like a fall morning. Perfect running weather! I was feeling good, so I decided to turn it into a tempo run of sorts. I warmed up the first mile, and then tried to push the pace for miles 2-4. It’s not easy for me to make myself run that fast without the competition of a race, so I was psyched about these splits.

After work, I went to “Detox and Re-tox” with a couple of coworkers. Wondering WTH that means? Well, it was an hour long yoga class (the detox) on the greenway in Boston followed by the “re-tox” – discounted vodka drinks and free food at a bar following the class. 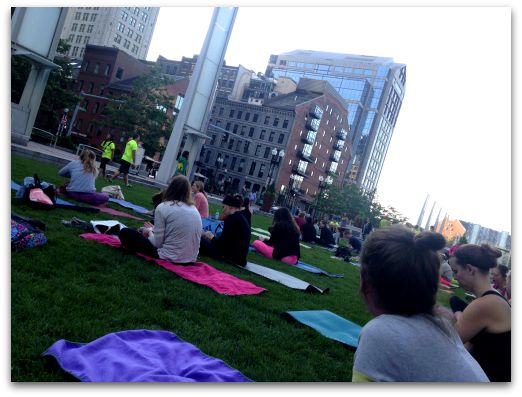 The instructor for this class was AWESOME. She was relaxed, reminding us that yoga is not a competition and not to take ourselves too seriously – as she put it, “It’s just f**king yoga“. That had everyone cracking up.  It was quick-paced, which was quite a change from what I was used to with the yoga class I took over the winter, but I managed to keep up pretty well, just copying the movements of the people around me whenever I was confused about a pose. They had a DJ playing hit music which added to the fun, energetic atmosphere of the whole event. There was also a little core work thrown in, which I loved. After the morning’s run, it felt really good to stretch my hips, hamstrings, and calves. It makes me think I should seriously try to make more of an effort to fit some yoga into my cross-training routine. I think passersby were a little confused to see 140 people doing yoga on the greenway in Boston – some tourists were taking pictures even! My only complaint was that they started 20 minutes late, so that by the time the class finished up, me and my coworkers all felt we should be getting home, so we skipped the drinks/food.

Friday – I took another rest day. I could’ve gone for a run in the evening, but after the long week, I really just wanted to collapse in a comfy chair, so that’s exactly what I did.

Saturday – It was raining in the morning, so I did a couple of Fitnessblender videos for abs and upper-body. I did about 50 minutes or so of cross-training, and then joined my Mom on her 5-mile run later in the afternoon when the weather had cleared up a bit. It was humid, but I was glad that I got some miles in after all.

Sunday – Another killer workout at the track! I did a revised ladder of sorts. I warmed up with a half mile jog and some stretching. Then I did:

I did 400 meters recovery in between each repeat, and another half mile cooldown, so all-in-all, it came out to be about 5 and a half miles running, 3 of which was around 7:30/mile pace. Luckily, this time I was at least wearing the right socks, so I didn’t end up with a bloody heel at the end of the workout.

So a pretty great week! Did you do any special workouts this weekend? How would you feel about doing yoga outside with 140 other people?

4 thoughts on “This Week in Workouts”