It was another solid week and I’m feeling really optimistic about this second attempt at 26.2 miles. 14 weeks is a long way to go though, so I’ve just got to really focus on getting the most out of each individual workout. Here’s what this week looked like:

Monday – 30 minute boot camp class. I already posted about this, so moving right along…

Tuesday – 5 miles easy. I was scheduled to do 6, but I decided to cut a mile so that I had a little more time to get some stretching done before I had to head off to work. Surprisingly, I felt relatively ok during this run, but part of me knew I was going to be more sore the next day.

Wednesday – And as expected, the soreness really set in on this day. I had 5 miles of hill repeats to do though, so I sucked it up and headed to the gym to get this done on the treadmill in the morning. Charissa had left me some GREAT advice on how to do hill repeats on the treadmill, and I was excited to try some different variations. Actually, excited may not be quite the right word, considering how sore I was… There may have been a little bit of dread mixed in. I warmed up the first mile, then increased the elevation to 5.0, and turned the pace up a bit, being careful to keep it in my aerobic zone though. I held that for 2 minutes before dropping the pace and elevation for a 2 minute recovery. When I got bored with those, I mixed in 2 longer hill repeats of 1/2 mile at 3.0 elevation and a slightly faster pace. Those I enjoyed a lot better than the short intense hills.

Thursday – My rest/cross-train day. My friend had tried to convince me to go to another boot camp class with her and I strongly considered it, but ended up passing so that I’d feel fresh for Friday’s tempo run. I still ended up going to the gym after work though, I just focused on my arms and abs. It was so crowded though! Since I’ve gotten so used to getting to the gym by 5:45 am, I had forgotten how crazy it is in the evenings. My gym has a really small area for stretching and core work, and so it can be difficult to snag a spot there. I saw way too much of this on Thursday night – 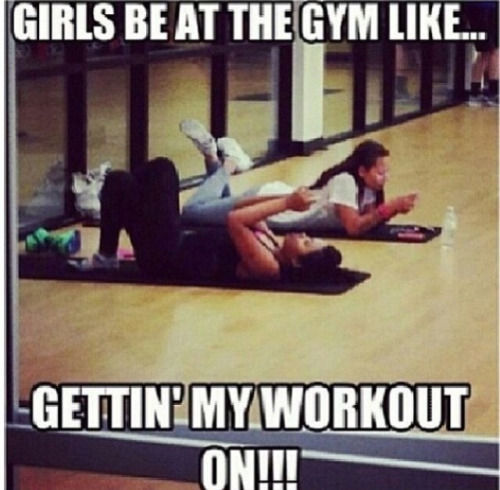 This KILLS me. If you’re not working out, stop taking up the space!!!! Ok, mini-rant over. I probably did about 45-50 minutes and then headed out.

Friday – 6 miles, with 4 at 8:06/mile. These 4 fast miles were kind of challenging. I’m getting much more comfortable on the treadmill, and it is more convenient to run these types of fast runs in a warm, well-lit gym than out on the roads in the dark, BUT I find myself much more comfortable running a faster pace outdoors. Maybe part of me is just irrationally afraid that I will fly off the back of the treadmill? (See 9 people who lost to treadmills)

Saturday – I decided to get my long run out of the way even though my plan technically calls for a Sunday long run (I think I may stick with this throughout the 16 weeks). It had been ages since I had done a run with the club I joined a few months ago, and they were planning on 10-14 miles, so I figured I would meet up with them. My plan called for 9 miles again, but I figured I would play it by ear and go a little longer if I was feeling good. I ran to our meeting spot, which ended up being exactly 3 miles from my apartment. These 3 miles I did at 8:51/mile, which is a little fast for a warm-up for me, but I was nervous I was going to get lost and I was cutting it close from the time I left my apartment. Luckily, I made it there, no problem. There was a good sized group of 8 or so runners and we quickly headed off on our route after introductions.

Some of the group was going a full 14 miles, but I peeled off with a group doing 8 miles, bringing me to a total of 11 miles for the day. I’m going to have to do more of my long runs with them! We averaged 8:33/mile for our 8 miles, and I felt great the whole way. There was a lot of stop and go, waiting at street crossings, which may have partially contributed to how good I felt. I forgot how much I love running with groups though! The miles tick by so much faster and it just felt really good to mix things up. The weather was BEAUTIFUL too; it felt more like the beginning of spring than the last day of January!

After we finished up, I decided to take an Uber home, rather than tack on an additional 3 miles, running back to my house. My Uber driver noticed my running clothes – turns out, he had run a couple of marathons many years ago! We chatted about running and training during the short drive back to my house and he wished me luck on my marathon.

Then, I came in and the newest issue of Runner’s World had arrived. I had been hoping it would come for days, especially after I saw the newest issue at the grocery store (and was almost tempted to buy it, despite having a subscription) It was seriously the best morning ever!!! 🙂

Sunday – 6 miles. I probably should have run these slower, but I wanted to see how it felt running my goal pace outside versus on the treadmill. My splits were:

Miles 3 and 5 were when I was aiming for 8:05, so I was a little under and a little over, but not bad. Running this pace definitely feels more manageable outdoors (at least on the flats!) It was a gorgeous day to run again, with temps in the mid 40s. All the birds were out, and it felt like spring. I stopped to take a pic during the last mile-

Total Mileage for the Week: 34

And this week’s inspirational quote: 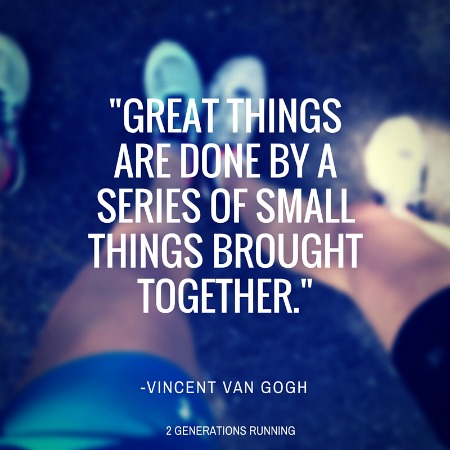 And now I’m off to Ohio for work! Be back soon 🙂

How was your week? Would you rather run long with a group or by yourself?