I have run a lot of 5ks recently (even excluding the Turkey Trot mishap). There was the Boston River Run, then the Indie 5k at The Running Event in Orlando, FL (I skipped the recap on this one… There wasn’t much exciting about it to be totally honest), and this past weekend, I ran the Yulefest 5k (though I used this as more of a workout and less of a race). 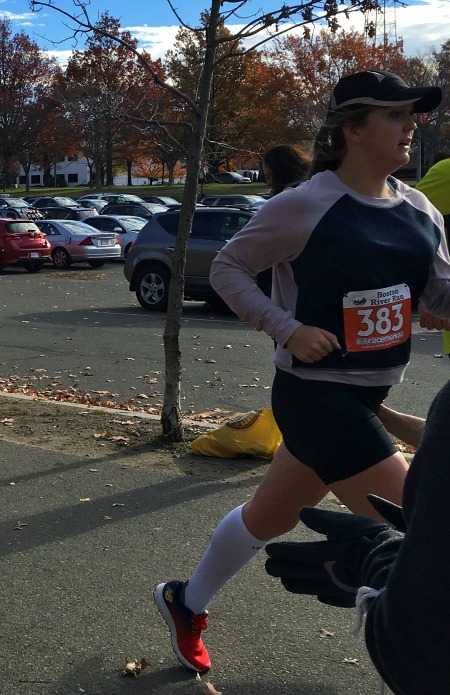 After all these races, I had a bit of a realization.

The 5k I ran in Orlando was PANCAKE flat, though hot and humid and I was seriously wiped out by Mile 2. It was such a struggle to keep running, which seems ridiculous given that the race was only 3.1 miles.

As crazy as it sounds, I think I prefer the slow burn of 26.2 miles to the intense blast of pain that comes with racing a 5k. Yes, the marathon beats your legs up more (and I have yet to lose a toenail from a 5k), but there is something about ticking off the miles in a marathon that makes me feel almost superhuman strong (as tired as you are by mile 20).

I have yet to really race a 5k where I did not feel like I was at death’s door by the end.

It’s funny because people automatically assume that it’s the “less serious” runners who are running 5ks for the most part. But running a really good, fast 5k is arguably much harder than running a decent marathon time. And this is definitely something I struggle with. I was really happy with my performance at Baystate. I’m proud of running a 3:53, and I’m also 100% confident that I can improve on that. It’s harder to feel that way about the 5k, when I feel like I am clawing tooth and nail to take a few seconds off.

The 5k brings back memories of the first time I raced the 400 in high school (one lap around the track). I took off fast and kept up fairly well with the older girls at first, until the final 150 meters where my legs just locked up. I felt like I was still running hard but to everyone else, it looked like I was jogging it in.

Obviously, everyone tends to prefer things they are good at and I won’t lie that that probably plays a big part in my preference. My marathon time has improved in huge jumps over 3 attempts, but with the 5k, it’s been quite the challenge to shave off SECONDS, and I have raced more 5ks than I can count.

I know I’ll get there in my 5k, it’s just a question of putting in the work and training.

So shoutout to all the 5k runners out there! Props to you for crushing it in a race that doesn’t get nearly the credit it deserves. And if you haven’t read Lauren Fleshman’s article, 10 Reasons the 5k is Freaking Awesome, you’ve GOT to read it. 🙂

Happy weekend and try to stay warm out there! It is going to be in the low teens in New England this weekend and I am pretty much ready to spend the entire weekend curled up under a blanket. 🙂