Welp, here we go again. The Fast Half is this coming weekend, on Saturday. Typically, I prefer Sunday races, but I’m actually kind of looking forward to getting this one done and then being able to relax the rest of the weekend, rather than worrying about the race (I don’t usually get nervous for races at all, but going for a PR does add another level of pressure.)

Overall, things have been going pretty well running-wise with a couple of small hiccups. I noticed a couple weeks ago that I had some tightness in my Achilles that persisted for the first mile or so of my run before subsiding. I’m no stranger to aches and pains, so I wouldn’t have thought much of this… apart from the fact that it became consistent. For the past couple weeks, that tightness/discomfort has always been there for the start of my runs. It’s not terribly painful and I have been able to run through it, but it’s been a cause for concern.

I tried to book an appointment to get into see the chiropractor my mom was seeing for a while but he didn’t have any openings until JUNE. Not super helpful. But I’ve been doing various exercises (heel drops, ankle circles, wobble board moves) and those seem to be helping, as it hasn’t felt as tight on the past couple of runs lately. So maybe I dodged the bullet? Who knows… I was happy I was able to complete my last hard workout this past week. 2 mile warm-up followed by 2 times 12 minutes @ 7:32, 3 minutes @6:56 with 3 minute recoveries. I ran early in the morning and I was a little nervous I wouldn’t feel awake enough to hit those paces, but I was almost spot-on.

Getting to see this sunrise was another AWESOME bonus.

Obviously, I’ve been weather stalking like a crazy person, even since we got inside the 10-day forecast window. Originally, they were saying 60s and rainy but now it’s looking like a high of 55 with afternoon showers. Honestly, I hope it doesn’t change too much because that would be PERFECT. Warm enough that I won’t freeze my face off the way I did at Half at the Hamptons but definitely not hot.

It looks like my first challenge will be just after Mile 4, then Mile 6-7 will be tough. 7-8 will have some climbing but it doesn’t look too dramatic. Fortunately, it looks like the end of the race will have more downs than ups. Is it going to be easy? Absolutely not. But I’m happy to at least know what I’m in for. I hadn’t been able to find any elevation maps for the Half at the Hamptons, and so that had turned into a nasty surprise. 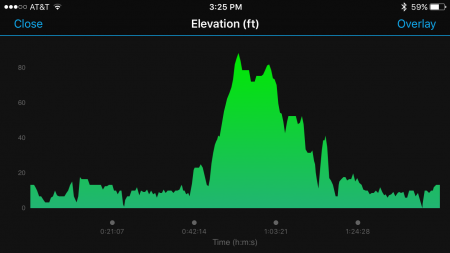 Anyway, that’s pretty much where I’m at! This week, it’s just about taking it easy, upping my carb intake just slightly, and keeping calm.

Bring on half marathon #18!