So this is my second post since my surgery. I’m about 2 and a half weeks out and have met with my Boston Scientific representative once to work a bit on the programs. I would say things are pretty good though we have yet to find a program that will get me through the night.

But in the meanwhile, our 12 year old lab, Brady, began to fail and we finally made the difficult decision that it was time for that dreaded visit to the vet.  But it got me thinking…

Just about three years ago, Brady and I had a little adventure. (I was already in pain but it hadn’t turned into the 24/7 nightmare that would start a few days later.) Brady was a big lab, but despite that he was afraid of his shadow.

So on this day, I took him out for a bit of exercise. We were at a pond and we were walking because Brady, who was 9 then, or 49 in dog years, could not chase the tennis ball the way he had in the past. Instead we walked around the pond and I would throw the ball gently just a few yards ahead so he didn’t have to go into an all out sprint to retrieve it. He was up ahead of me, and on this particular day, he decided to be brave – and to check out the little black furry creature he could see up ahead. As I got closer, I made out the white stripe and I began to run- but it was too late.  As I got to him, he was rubbing his eyes and foaming at the mouth as he tried to rub off the skunk spray! The skunk “hightailed” it into the woods nearby. I cursed; the one time he decided to be brave!

We drove home and my son and husband and I tried all kinds of shampoos to get him clean. For months, he still smelled skunky if he got wet, and my car smelled for a year!

But the reason I’m writing about this is because this incident- and his final day with us just yesterday kind of bookmark my three year saga with my back.
And it made me realize he kind of grew old with me, and I with him…. he was “49” and I was 57 when this all started…  three years later he would be 84 in dog years …and in a sense we grew old together…
When I would watch him struggle to get up, and I felt like crap , too, I would tell him, “I know honey, getting old sucks”. Because until this thing with my back felled me, I had felt as good as any 57 year old woman who can run a 4:15 marathon, so pretty damn good.

Brady was not a cuddly dog, but one morning when I burst into tears, he came over to me and stuck his face into mine, which was both out of character and comforting.
When he couldn’t chase the tennis ball anymore, we would take him to a local pond, because he could still swim, and we would toss the ball and sip our ice coffees watching him do the thing he loved most. Swim. We managed to do this up until last year, because at that point he could no longer get into the car on his own – and of course, I could not lift him. 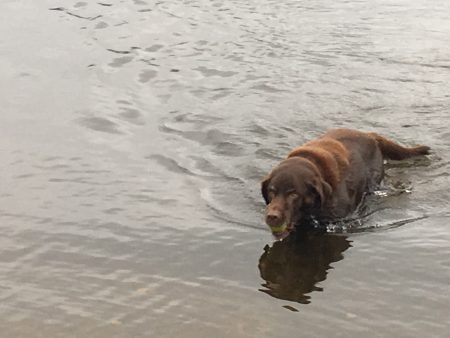 I feel like I grew old with him and by the time we realized he was just too uncomfortable too much of the time, he had shown me how to age with grace.  There were never any “f-bombs” when he tumbled down the 2 stairs into the yard because he was losing control of his legs. He was always happy to eat, and always ready to go out for even those short walks up and down our dead end street. There was never a snarl or a whimper when he struggled to get up, though he had to have been in pain.
He was sweet and gentle and happy in all the good moments, and I bet he didn’t dwell too much on the bad ones – the way I have for the past 3 years.

So even though I now have this new Spinal Cord Stimulator, which I hope means that I will- at least for a few years yet – not feel so old and decrepit, I hope I can hang onto the lessons in aging that Brady taught me.
Age with grace…don’t forget to eat… and when the time comes to leave this home, trust that there will be tennis balls in the new one…

2 thoughts on “Lessons in Aging and Mortality”