2 Comments September 21, 2019 Nora @ 2 Generations Running
After all this, I’m not sure I want to do the whole silver linings thing, and I swear if I hear one more person say “if life gives you lemons, make lemonade”, I might scream! I read a ton of books about the power of positive thinking, meditated, tapped (yes, there is such a thing, it’s called EFT, for anyone interested) and generally made myself crazy trying to will myself to be healthy. It did not work.

But along the road to my SPS, there were a few bright spots, so I think it makes sense to mention these….

My new friend Cindy. She only lives around the corner from me, and though she is also a runner, we belonged to different running clubs and so we had never run together.
We saw each other at races and began to chat, mostly because our husbands knew each other. (Also, I had seen her running stats on line and didn’t think I could ever run with her.  She is super fast and I was a little intimidated.)
Then we met again, as we tried to get involved in the local Achilles chapter. The group walked, because I couldn’t run, and we got to chatting. That led to meeting a few times for coffee, and then an occasional movie. That “occasional” movie ended up turning into a Friday night dinner/Netflix tradition, and since Cindy’s husband works nights, it’s perfect for a girls’ night in! Many nights we never turned on the tv, or turned it on pretty late because we talked so much over our bottle of wine.  There were many world issues to be solved and we discovered we had so much more in common than running.
(Disclaimer: I did not drink and drive. Even though she is only a mile away, my husband Jim, or Uber Jim as we came to call him, always waited patiently for my call in order to come and get me…)
Over the last three of years, these Friday nights have meant a lot to me.

And then there is Penny. Feeling down for so long I had really been craving some “pet therapy”. From my recent post about Brady, you guys know we still had a wonderful pet but we had always been a two-dog family, and I was really craving a dog that I could call mine. After Nora ran the Chicago marathon for Paws New England, I started cruising their instagram feed… I found Penny, who was called Gayle at the time. She was a three year old mutt and they said she was gentle and very affectionate and cuddly. I filled out the paperwork and hoped for the best and two weeks later she was ours. I was eight weeks out of my first surgery and things were not improving.

Penny joined me on my walks and on my bed, the first of our dogs to ever be allowed to do that. She was a soothing presence when I woke in pain in the middle of the night and my thoughts began to spiral into sad places. Her breathing, or touching her paw, helped. After my second surgery, my husband had to take over the dog walking duties and Penny was fine with that. I wanted her to be “ mine” but basically she loves everyone and that’s a good thing.  She is a sweetie and I’m anxious to see if she will make a good running partner!

And lastly there’s my husband, Jim, though this maybe doesn’t fall into the category of silver linings: he drove me to so many appointments, took notes and asked questions when I sat there close to tears, my mind a muddle of fear and despair. He tied my shoes, walked Penny when I couldn’t, and didn’t complain about eating so much frozen food because I couldn’t stand long enough to cook.

So now that my pain is lessening, I know I am on track to getting my life back…maybe not the exact same life, but that’s ok, because in my new life, I have Cindy and Penny.

My birthday at Cindy’s house! 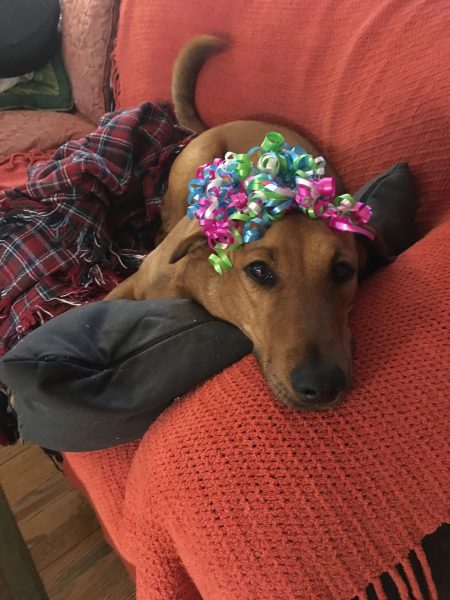