This is one Monday I’m actually pretty excited about because… it’s Marathon Monday! That’s right, the Boston Marathon is TODAY!

And guess where I spent most of the weekend? 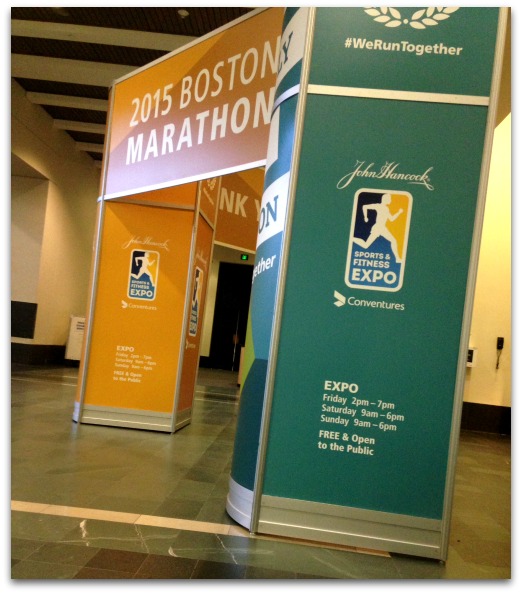 At the expo! As I hinted in a previous post, my internship in Boston was with the company working to organize and put on the expo, so it was awesome seeing it all come together to turn into what I can only describe as some sort of combination between Christmas and heaven for runners. 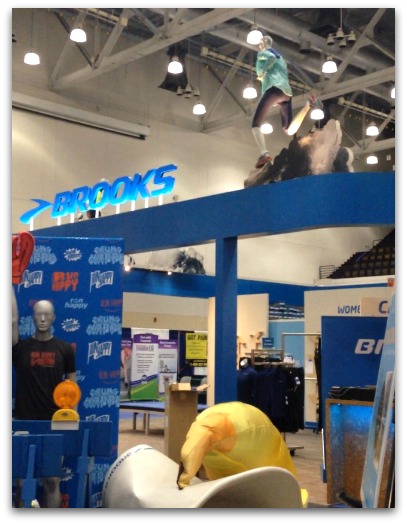 It seriously felt like the most wonderful time of the year in the expo. The atmosphere was electric, and you could just tell that some of the runners LIVE for this event (and I can understand why!). I didn’t take many pictures since I was working, but some of the booths were absolutely incredible (like the floating runners who actually moved over the Brooks area! I instagrammed a video of it if you’d like to see.)

I didn’t get a chance to talk to them, but I saw Chris McDougall (author of Born to Run!) and Scott Jurek (famous ultra runner and author of Eat and Run). They were signing books at the Clif bar booth on Friday, and it was so cool getting to see some of my running idols in person!

The weather this past weekend was absolutely gorgeous, in the mid 60’s and sunny – great for the BAA 5k held on Saturday (and my 11 mile run on Sunday)! I wish it was going to stay that way for the marathon, but unfortunately it looks like the runners will be dealing with wind and rain today. 😦 Nevertheless, it should be an exciting race and I’m looking forward to watching it! GOOD LUCK TO ALL THE AWESOME, FRIENDLY RUNNERS WHO WORKED THEIR BUTTS OFF TRAINING FOR THIS DAY FOR MONTHS AND MONTHS!!!! Everybody’s rooting for you. 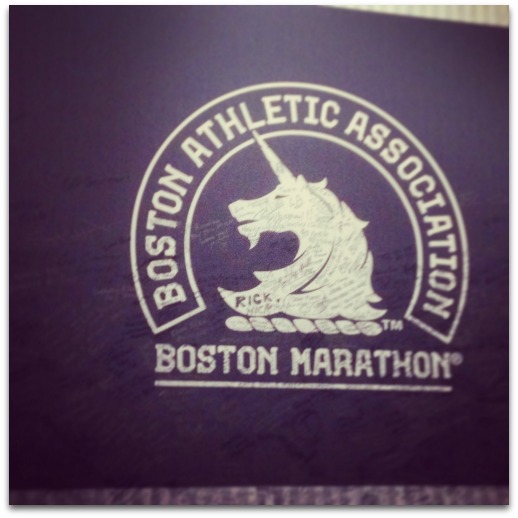 Have a happy Boston Marathon day!

Have you ever been to the Boston Marathon Expo? Will you be watching the race all day like me?

So today was a bit of  a special day. My mom, brother, and I participated in the Lowell is Boston Strong 5k to benefit victims of the Boston Marathon attack who live in the Lowell, Mass area. I’m so glad we were able to show our support for this cause.

While no one in my family was in Boston to watch or participate in the marathon this past April, the attacks left a distinct imprint on me,  as a runner and as a person. I still remember walking through my college union on the bright, sunny afternoon and pausing to watch CNN on TV. I simply could not believe my eyes- bombings at the Boston Marathon? A running event?! The longer I watched, the more freaked out I became- I thought of all my friends who go to school in Boston and how they routinely watch and cheer for the marathoners. I thought of my resident assistant from the previous school year who was running Boston, and of course, numerous members from our running club who were also there. I immediately tried to call my friends, but the phone lines were jammed. It felt like something out of a disaster movie. Luckily, I was able to text my one friend who replied that she was alright and would call me when she was able to make it back to her dorm.

But even when I got the word that everyone I knew who had been there was ok, I still felt sickened. The fact that people are able to inflict such immeasurable pain on others for seemingly no reason at all will never be understandable to me.

But the way people pulled together- in Boston and in the running community across the US- made me so incredibly proud. Clearly, the human spirit is stronger than any form of violence it is pitted against. I suspect that next year’s Boston Marathon will be more well-attended than ever before. After all, the whole city and each and every single marathoner is Boston Strong.

So yeah, I was excited to run today.

The race was scheduled to begin at 10 am, so we got there a little early to pick up our T-shirts and warm up. It was pretty darn hot this morning, so no problems there. 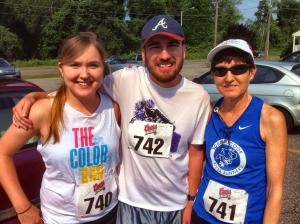 My dad (resident photographer, coach, and cheerleader)  took some pics of us as a runner family before the start (as you can see, we aren’t drenched in sweat yet)!

Before the race got started, the officials had the whole group gather together for a photo- 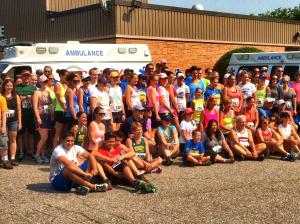 (I’m in the middle in the yellow hat!)

Then, it was time for the race to begin! I was feeling competitive today and was aiming for a good time so I made my way towards the front section of the starting chute while my mom and brother took places a little further back. And then we were off!

My pace through the first mile was fast for me- around 7:30. I was pumped up on adrenaline though and feeling good so I went with it, hoping to maybe catch my 5k PR (23:46).

The second mile of the course brought us out onto the side of a major roadway. It was flat, which was nice, but there was zero shade, so it got very hot very fast. My pace dropped a bit to around 7:50ish. Over the last mile, I was super tempted to walk. Instead, I tried to ignore those thoughts and focus on my arms swinging strongly and evenly (my go-to method for when I’m really tired).

FINALLY, I rounded the final bend onto a side street which led to the finish line, and I gave it all I had! 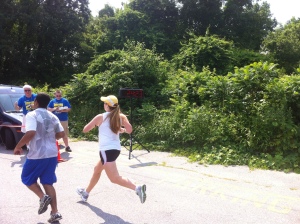 While I didn’t catch my PR today, I was still quite happy with the race- I came in 10th overall with a time of 24:25 and an average pace of 7:53. Not too shabby for such bad heat and humidity! My mom and brother both finished strongly a few minutes later.

At the finish line, my mom and I shook the hand of a mother whose son had been injured in the attack that day. She told us how he had been standing near a mailbox, chatting with his friends when the bomb went off. The mailbox protected him from losing any limbs, but his friends were more seriously injured. It’s crazy to think how such a small circumstance (like standing next to a mailbox) can have such a critical impact on a person’s life. We told his mother they would be in our thoughts and prayers.

After coming home and showering, I proudly put on my new T-shirt from the day’s race. I am more determined than ever before that someday, I will run the Boston Marathon. But for now, me and my mom have 48 half-marathons to get through. 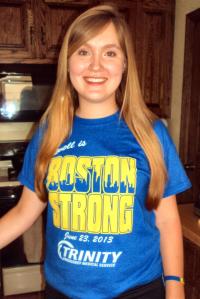 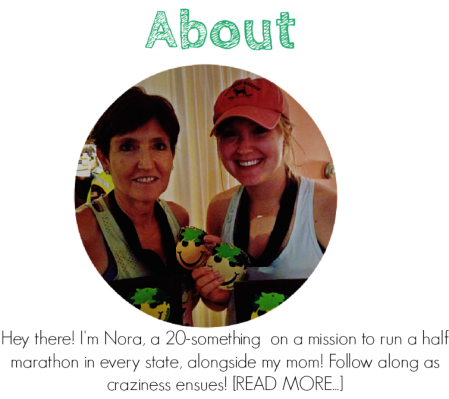